The two young drivers of the Equipe de France FFSA Karting made their debut last weekend in CIK-FIA Karting Academy Trophy on the circuit Aunay les Bois / Essay. With the new federal collective organization and the active support of the FFSA, they were able to give their best and obtain significant results: pole position and 3rd place overall for Mialane and 8th position with excellent times for Imbourg. 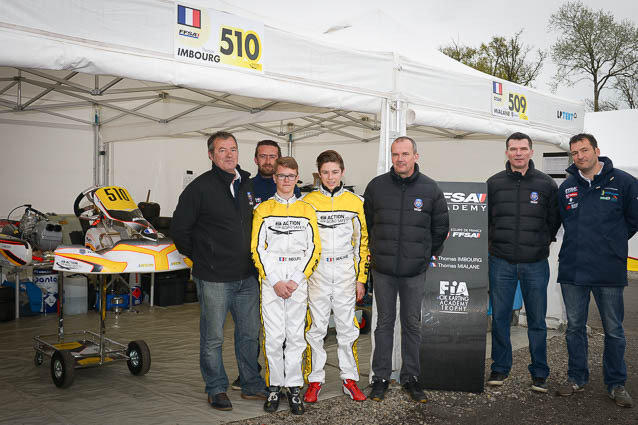 Thomas Imbourg and Thomas Mialane, the two drivers selected this year to represent France in this competition directly from the Cadet class, have no real international experience. To meet this challenge, the FFSA Pole Top Level has revised its strategy to give them the best chance to establish themselves among the 51 entries in the CIK-FIA Karting Academy Trophy. Beyond support for almost all of their costs, both Thomas's enjoy particularly competent supervision. In the light of past experience, Christophe Lollier and Marc Berteaux decided to entrust the technical aspect of the competition for specialists: Didier Blot, a renowned trainer of young talent, and technical and engine specialists from the Auto Sport Academy played the role of team manager and engineers with high efficiency.

Once the minor problems at the start of meeting with new float bowl carburettors were resolved, the staff managed the set-up of the Exprit / Vortex OK-Junior made available by the official supplier OTK Kart Group perfectly despite changing weather. Several exchanges of engines by drawing lots ensured the sporting fairness of the competition.

Thomas Mialane was able to adapt to the Exprit chassis well. Lacking speed slightly during the test sessions, he reversed the trend by setting the fastest time in Timed Qualifying at Aunay les Bois. He then continued with consistency in the top three of the competition and is 2nd in the provisional Trophy classification.

Thomas Imbourg had a more complicated competition starting further back in the Qualifying Heats. His motivation enabled him to rectify the situation in the closing stages and he finished in a very good 8th position which places him in the top 10 of the Trophy. This result is particularly encouraging for Imbourg as he is pursuing a Cadet season in parallel on very different equipment to the OK-Junior used in Academy Trophy. 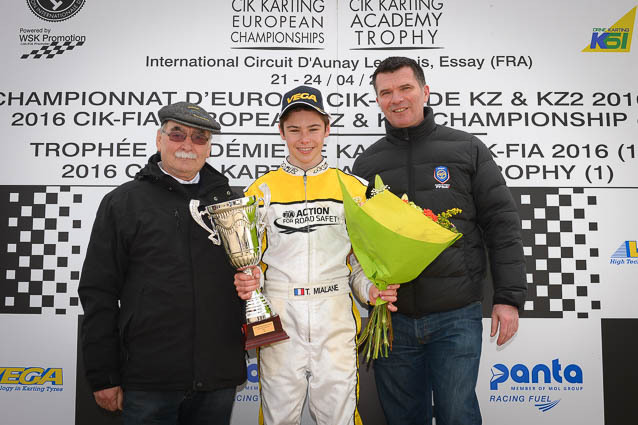 Christophe Lollier, National Technical Director: "We can be satisfied after the first event of the Academy Trophy. Our young drivers have done very well, finishing 3rd and 8th in the Final, but the conditions were not easy to manage throughout the weekend. Our new organisation has been proven and the young people were able to focus on managing their racing. Their hard work, their listening and ability to adapt are a pleasure to see. This competition allowed us to identify some issues to address while setting new goals. Victory will be in focus at the next meeting at the end of June at Portimao. Until then, we will have time to prepare, in particular by spending two days at the Portuguese circuit using the equipment made available by the FFSA."